Nash Morris has scored his maiden TA2 race victory on his debut in the series, as Nathan Herne emerged victorious outright at Round 1 of the 2021 PROMAXX Performance Exhausts TA2 Muscle Car Series.

Herne cantered away at the start of Race 3, as Chris Pappas charged from sixth to third behind Paul Morris Motorsport stablemate Nash Norris by Lap 4.

The safety car was called on Lap 5 when Graham Cheney and Tim Shaw clashed exiting Turn 5, sending both cars into the inside wall, with the race ending under the safety car.

Veteran speedway driver Barry Kelleher finished a strong eighth, while George Kulig and Zach Loscialpo were both penalised five seconds for being out-of-line on the rolling start.

As Race 4 commenced, Mark Crutcher moved up to fourth before he spun at Turn 2 and was collected by Zach Loscialpo. Anthony Tenkate passed Murray Kent for fourth down the main straight on Lap 3.

Herne elected not to use all six tyres allocated for Round 1, instead leaving two new tyres for injured car owner Russell Wright when he returns to the wheel at Morgan Park for Round 2.

Herne built a gap early on in the race before Morris closed in on fresher tyres and took the lead on Lap 7 at the Turn 8 hairpin and was never headed.

Morris went on to score his first TA2 race win on debut by 20 seconds as Herne battled home on worn tyres, with Pappas scoring his second podium finish on the run.

The outright points saw Herne take round honours from Morris and Tenkate.

“It was my first time racing a TA2 and I had a great time down here in Sydney,” said Morris.

“I didn’t think I would be that far up the grid but I’m really happy with how we progressed to take the win in the final race.

“From here I think we’ll continue on to Phillip Island next week and see how we go against the likes of Aaron Seton and Owen Kelly as well as Nathan in the Trans-Am Series.”

“Hopping into Russell Wright’s car for the weekend, we had six new tyres allocated for the first round of the year, and as I won’t be competing the full TA2 Muscle Car Series I said to Rusty, “I’ll save the last two tyres for you and you can have a full set for the next round,” so I ran around on four tyres for the whole weekend,” said Herne.

“Personally I was using the weekend as a big test session for my own car and for Wright’s team as well.

“It wouldn’t have been great for the tyres to do a 30-minute flat-out qualifying run last night and it came back to bite me in the last race today, but it’s all about learning and a great experience to learn more about these cars.

“We threw the kitchen sink at this car with setup changes all weekend and we had a quick car throughout, so it’s a credit to Rusty, Jake and Wendy in the Wright Property Investments team and I wish them all the best for the season ahead.”

“I drove the wheels off the car all weekend, I had an absolute ball and the racing was fantastic,” said Tenkate.

“Racing with Murray Kent and Mark Crutcher, those guys are clean, fair and awesome to race with on track.”

“Thanks to Pete and Hughie for their support as always to keep the Tenkate Mustang on track, we can’t wait to get to Morgan Park.” 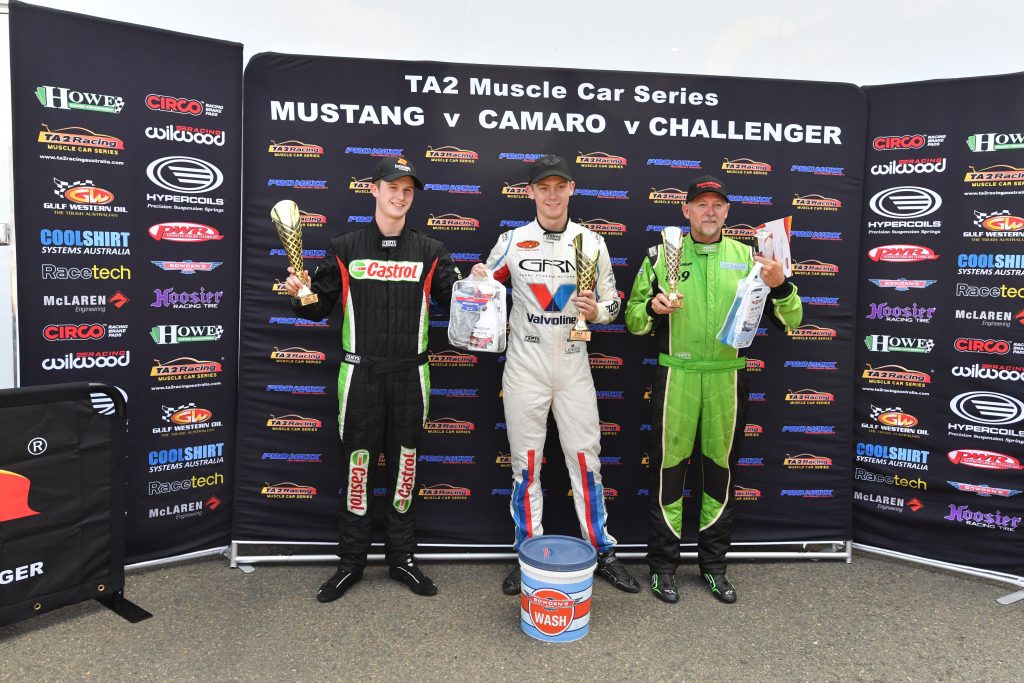