Two brand-new circuits and a marquee series of races in the top end highlight the 2023 TA2 Muscle Car Series calendar announced today, which will include a new free-to-air television deal with SBS, plus live coverage on Fox Sports.

The series will headline all six rounds of the newly-announced Hi-Tec Oils Super Series calendar in 2023 as well as a standalone southern region round in the planning stages at The Bend Motorsport Park.

The six Super Series rounds will boast live free-to-air television coverage on SBS on the Sunday of each race weekend and simulcast on Fox Sports, extended coverage on weekly motorsport show Speedweek and a magazine-style show in between events as well as an expanded live streaming package.

The season will commence where it concluded a sensational 2022 series at Winton Motor Raceway. Victorian circuits will bookend the calendar with the grand finale at the revived Calder Park Raceway.

Calder Park has been a dormant circuit racing venue since 2008, with the Super Series finale to mark the circuit’s return as a host of national-level motorsport.

South-East Queensland will take in Rounds 3 and 4 in Winter, with Queensland Raceway hosting Round 3 in June followed by Morgan Park in July.

The fifth round will be a Friday/Saturday day/night fixture at Sydney Motorsport Park on October 13-14 which will combine rounds for both the Northern and Southern regional Series.

South Australia will host the penultimate round of the TA2 Southern Series at The Bend Motorsport Park on October 27-29, before the Calder Park finale in late November.

The popular Northern and Southern regional point score concept will return in 2023, with all rounds except The Bend featured as part of the new Hi-Tec Oils Super Series. Hidden Valley, Queensland Raceway, Morgan Park and Sydney Motorsport Park will double as Northern Series point scoring rounds, while Winton, Sydney, The Bend and Calder will be included as Southern Series rounds.

The overall winner of the TA2 Muscle Car Series will receive the TA2 Championship ring valued at over $5000, plus a fully refreshed exchange race engine valued at $22,000 subject to terms and conditions. Second and Third in the series will also receive gearbox and rear end exchange units respectively as part of the series prizes.

17-year old third-generation sensation Jett Johnson won the TA2 Muscle Car Series this year, and is working towards the Supercars ladder in 2023, while the Northern and Southern Series were claimed by Graham Cheney and Zach Loscialpo respectively, while Brett Niall won the inaugural TA2 King of the West title.

The TA2 Western Region point score will also commence in early March and feature events at both Wanneroo Raceway and the Collie Motorplex throughout the year.

Further event details and formats for 2023 rounds will be confirmed in the new year.

“Our plan has always been to give drivers the opportunity to race at as many different tracks as possible, so to include Hidden Valley and Calder Park is awesome.

“We are looking at doing something quite special for Hidden Valley, working with the event promoters and the Hi-Tech Super Series team to come up with a concept where both drivers can earn championship points and have a two-driver finale with a compulsory driver change.  It’s early days and work in progress at the moment, however it should be exciting and a great point of difference.”

“My first thoughts when I saw the calendar was wow!

“To be racing down in Victoria at historic tracks such as Calder Park as well as taking on the very loved Hidden Valley Raceway in the Northern Territory is an absolute privilege.

“Next year is going to be such an exciting year full of new tracks, drivers and battles, and I am more pumped than ever.

“The Team and I are working hard to prepare our new mustang for 2023. With the first round fast approaching already we are looking forward to showing everyone what we have in store.” 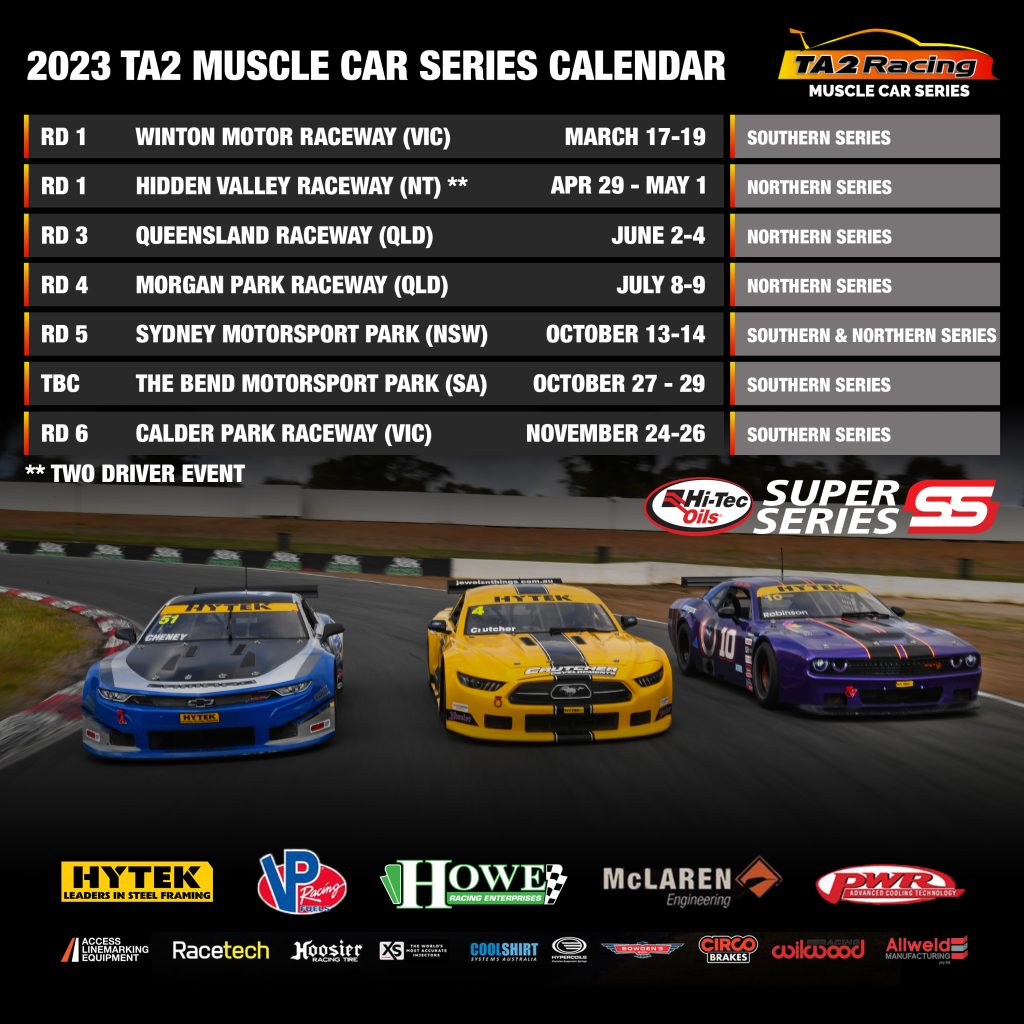