Gold Coaster Ashley Jarvis wrapped up the Performax TA2 Muscle Car Series title with a conservative drive to finish third in the final round at Sydney Motorsport Park, however won up the title comfortably from New South Wales Ford Dealer Hugh McAlister.

Reigning champion Russell Wright finished third in the Performax Cup standings in the RoadBees Transport Ford Mustang, and also claimed the Masters Award for the best performing driver over 50, despite failing to finish the final race with engine dramas in the Mustang.

Aaron Seton dominated all four races this weekend in the Castrol Harris Racing Mustang, but came under pressure in the final race from Port Macquarie’s George Miedecke, who debuted a new Dodge Challenger. Seton hung on to win from Miedecke and Hugh McAlister with father Ian taking out the round award in the Masters title.

Jarvis was extremely proud to claim the inaugural national competition for the TA2 Muscle Car Series in the Lighthouse Electrical Chevrolet Camaro.

“I never thought I would be standing here at the start of the season, I can’t believe it and couldn’t have done it without Mum and Dad and the crew,” Jarvis said.

“We are very much a small family team but this weekend was all about being consistent and to conserve our points lead, hoping that we wouldn’t get taken out by some of the new guys trying to make an impression.”  Jarvis said.

Hugh McAlister was equally wrapped with his second place in the Performax Cup, in only his second year of full competition.

“This is fantastic, a bit of a surprise to be honest, but happy for Dad and the team to finish up against some of the best drivers in the country. Roll on 2019.”

Wright, who heads to the Circuit of Americas next weekend for a round of the TA2 series as part of his prize for winning the 2017 title, conceded graciously that the young guard are just getting quicker, and the competition even more intense.

“Our car hasn’t been quite right for the past few rounds, and we lost an engine in the final race today, however happy to still be third overall in the series and the first of the Masters.

“Hopefully my bad luck is behind me, and all comes together next weekend in Austin Texas.” Wright said. 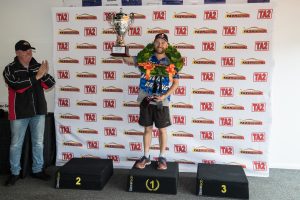