Wright Finishes Inside Top 20 in USA TA2 Championship Round

Home/Wright Finishes Inside Top 20 in USA TA2 Championship Round

Wright Finishes Inside Top 20 in USA TA2 Championship Round

Queenslander Russell Wright finished Saturday’s hour-long race of the American TA2 Series presented by Pirelli in 17th place, after running as high as fourth in the early laps of the race.

Starting from 21st after being baulked by a spinning car in qualifying, the Stevens-Miller Racing Ford Mustang driver made a demon start to be as high as fifth at the end of the first lap. A first corner touch-up took out newly-crowned champ Rafa Matos, and Wright was able to take advantage of the situation and come through unscathed.

After changing the front bar from qualifying to dial out some understeer, the car was on the pace and a lap later he made the move into fourth place, when he was hit from behind and turned around at Turn 10, just before the hairpin onto the back straight.

The brand new Howe Racing Enterprises-constructed Ford Mustang hit the wall hard on the left rear corner, and a damaged tyre forced him to limp back to the pits.

Going a lap down during the stop to repair damaged rear bodywork. Wright then fought back from near-last to finish 17th.

The race was taken out by Texan Gar Robinson, who raced in the Bathurst 12 Hour Combined Sedans support event earlier this year and placed second outright, as the Chevrolet Camaro driver took the flag with a last-corner move on Misha Goikhberg’s Ford Mustang to win by just six-hundredths of a second.

“My plan all along was to keep my nose clean on the first lap, and there was a fair traffic jam at Turn 1 which I was lucky to get through unmarked,” Wright said.

“The car felt much better, and when I ended up in fourth I thought there’s a chance for a top 5 finish at least. Unfortunately, I got punted quite heavily from behind and taken out, which caused a flat tyre and some rear-end damage.” Wright said.

“I would like to thank Kevin my engineer, Joe Stevens, Chas Howe for the brand new car and Peter Robinson from TA2 Racing Australia for making it all happen.

“It’s another tick off the bucket list and an experience I will forever cherish.”

Wright will now go on to the final round of the series at Daytona next weekend as a guest of Trans-Am and to attend the series presentation evening after the final race. 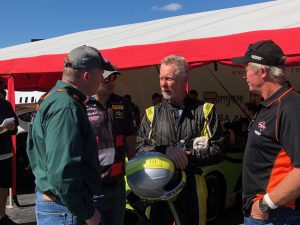