The Performax TA2 Muscle Car Series has teamed up with Australian jewellery retailer Wallace Bishop to unveil the TA2 Championship Ring, a unique reward in Australian motorsport to be awarded to the overall series champion at the end of each season.

The idea for a ring to be presented to the champion was conceived by TA2 importer Peter Robinson.

The Australian-made hand-crafted ring, made in 18ct Yellow and 18ct White gold was designed by Stuart Bishop and Andrew Stott with the centrepiece being a wheel drawn to replicate the actual wheels used in the series.

Bishop is a renowned drag racer in a supercharged V8 Camaro Pro Slammer, and the jeweller has previously worked on the trophies for the Virgin Australia Supercars Championship.

“We were very honoured to be commissioned to design and manufacture the championship ring, given our history in motorsport.

“It will be a fitting reward for a well-earned and closely-fought series title.”

2017 series champion Russell Wright will be presented a ring for his efforts, as will the 2018 series champion at an awards presentation night to be held at the Alpha Hotel Eastern Creek on October 28, following the completion of the final round this weekend.

18-cars head to Sydney Motorsport Park for the seventh and final round of the 2018 Performax TA2 Muscle Car Series, in support of the penultimate round of the Australian Motor Racing Series.

The series is set for qualifying and two races on Saturday followed by two races on Sunday, with Sunday’s action live streamed courtesy of Blend Line TV on the official event social media channels, and live timing via Natsoft Race Results. 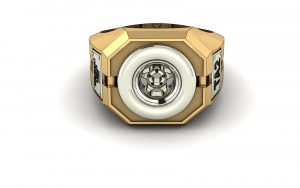