TA2 champion to be crowned at Winton

Home/TA2 champion to be crowned at Winton

TA2 champion to be crowned at Winton

The 2022 TA2 Muscle Car Series framed by Hytek has come down to the wire, with five racers in with a chance of glory heading into the final round this weekend, 18-20 November, headlining the Australian Motor Racing Series at Winton Motor Raceway.

14 cars are set to hit the track for the TA2 season finale, with the regional Victorian circuit to host its second round of the season after an action-packed round in June.

The third-generation racer will be gunning for his first national title with his family-run Team Johnson outfit, and will compete at Winton with the assistance and support of both his Supercars round-winning father Steve Johnson, and five-time Touring Car Championship winning grandfather Dick Johnson.

The first of the remaining contenders is Graham Cheney. The Bathurst-based racer has had a remarkable rise in motorsport after a transition to four-wheels from a successful background in off-road motorcycle racing.

Cheney heads to Winton after a challenging build-up which included a stint in hospital with a lung infection, but the IES Camaro driver is ready to put his best foot forward at Winton.

Cheney scored his first circuit racing title by claiming this year’s TA2 Northern Series, while fellow New South Welshman Zach Loscialpo wrapped up the Southern Series title at the last round at Sydney Motorsport Park and sits fourth in the points heading into the season finale.

The championship scenario currently sits if Cheney were to win all four races this weekend, Johnson would only have to finish each race in the 14-car grid to score enough points to secure the title. However, if Johnson were to DNF a single race, he would need to finish second in each subsequent race to ensure the title goes his way, providing Cheney wins all four races.

An additional consideration for the championship contenders will include the return to the grid of the two Dream Racing Australia Mustangs of Kyle Gurton and Jackson Rice. Gurton and Rice starred in the series’ last visit to Winton, as Gurton won Race 1 over Johnson and Rice threatened for podiums all weekend.

Nicholas Bates sits third in the points, and also leads the Circo Masters Class (for drivers over the age of 50) ahead of Mark Crutcher and Paul Hadley.

Bates, the younger-brother of Australian rally stars Neal and Rick, has been a shining star in his rookie motor racing season with no circuit racing experience this year outside of Time Attack events.

Bates is also in strong contention for the RaceTech Rookie of the Year Award, with the winner to take home a RaceTech Simulator Starter Pack valued at $1999.99.

Fellow rookies Josh Haynes and Dylan Thomas are absent from the final round. After a sensational rookie year which netted one pole position and three race wins, Haynes is out of action for the final round after completing shoulder surgery following the last round in Sydney, however Haynes is primed for a series return in 2023.

A worthy return to the grid for the season finale will be Queenslander Matthew MacKelden. The Kubota Racing driver returns in a NASCAR-inspired livery on the #99 Mustang following a ground-up rebuild by Team Johnson after a high-impact accident at Mount Panorama almost 12 months ago at the Bathurst 1000, with a shakedown completed on Wednesday at Queensland Raceway before heading south to Winton.

The TA2 Muscle Car Series framed by Hytek will have four 12-lap races at Winton Motor Raceway. Track action kicks off on Friday for practice, before Qualifying on Saturday at 10:25am followed by a Top 10 Shootout and Race 1 in the afternoon.

The final three races on Sunday will be live-streamed on the TA2 Racing Australia and AMRS facebook pages, as well as the AMRS YouTube channel.

“I’m just going to cruise around and minimise our mistakes. I don’t need to win every race, just got to keep it on track and make sure we have the points in the bank to seal the championship.

“Dad and the team have just told me not to push it. We don’t need to race anyone or fight anyone, we just need to finish each race. We may end up being too conservative just to make sure we don’t make any silly mistakes and we can come away from the weekend with the championship.”

“I’m a little bit nervous, there’s a bit of pressure to hold that second and try and keep as close as we can to Jett to help us out in the championship.

“We’ll be doing pretty much what we’ve done all season, try and be competitive and make sure we finish every race, as a DNF costs you so many points in this class, so we’ll try and stay out of trouble and stay up the pointy end.

“This year has been unreal. This is my first full season after the COVID years and I’m really enjoying it, I didn’t think we would be in this position going into it but it shows how important it is to be consistent and finish every race.

“After Sydney I got an infection in my kidneys and it jumped to pretty much every organ in my body including my spline which didn’t help. While I was in hospital I got pneumonia and spent a week in ICU.

“Every day I’m getting better but still got a long way to get back to 100%. Last week I didn’t even think I’d been capable of driving a car, I struggled to walk 100 metres but we won’t know how I go until we start pushing and see how it goes.

“The IES Motorsport team have been amazing, I wouldn’t be in the position we are without the team we’ve got. I haven’t had to touch anything, they’ve got it all under control as they always do so we’re looking forward to the weekend and we’ll give it our best shot.”

“The accident was by far the biggest of my career and its physically taken me 12 months to get my shoulder right.

“There wasn’t much left of the old car, maybe the steering wheel, the dash and some other bits and pieces so this is practically a totally brand-new car.”

“It’s been a complete rebuild which is why it’s taken so long. Steve [Johnson], Jett [Johnson and Ben Leeds have poured hours and hours into the project and the outcome is a work of art.”

“There is plenty of DNA from the US in these cars, so I wanted to make sure we paid homage to that by running something you’d see on a NASCAR.” said MacKelden. 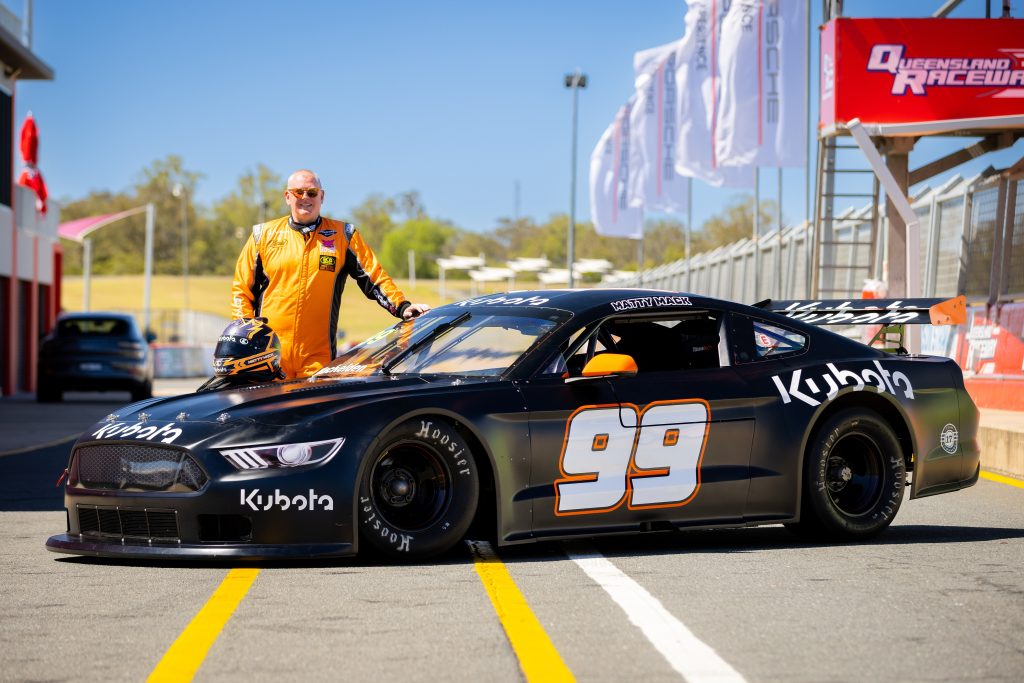