The TA2 Muscle Car Series is set for it’s biggest year ever in 2022, with organisers announcing a six-round, nine-event provisional calendar for next season.

The TA2 Muscle Car Series Champion will be crowned based on points accumulated over the six-round series, however each regional area will also feature its own four-round series and point score largely within the AMRS calendar.

The regional series have been created due to an increased in desire from competitors to minimise long-haul travel and time away from business by having a locally-based competition.

Each regional series will crown their own champion, while planning is underway for a grand finale State-of-Origin style shootout to wrap up the season.

From the season-opener under lights at Sydney Motorsport Park in March which will double as Round 1 of both the Northern and Southern Series, The Bend Motorsport Park in South Australia hosts Round 2 at the state-of-the-art FIA Grade 2 circuit, ahead of the first of two visits to Winton in June.

The national series then takes a pause  ahead of two back-to-back invitational events to launch the TA2 Muscle Car Western Series in July. Perth’s Wanneroo Raceway and Collie Motorplex will play host to a host of national racers taking on local entrants to battle for the ‘King of the West’ title.

Queensland Raceway will host the fourth round of the national series in August before a second visit to Sydney Motorsport Park at the end of September for the penultimate championship round.

The season will conclude with back-to-back events in November, with the non-championship Trans-Am 100 at Mount Panorama followed by the final round at Winton.

While there wasn’t a national TA2 Muscle Car Series champion crowned in 2021, 16-year-old Jett Johnson took out the three-round Northern Series, while Mark Crutcher took out the Southern Series after a strong final round at the Bathurst 1000.

Round 1: Sydney Motorsport Park (NSW), February 18-19 (Northern and Southern round)

“Given the challenges over the past two years, we believe the 2022 calendar offers TA2 Muscle Car Series competitors the best chance of getting as much track time at premium tracks with a calendar that offers six primary national events, combined with a regional breakout to complement the AMRS series.

“We are closing in on over 80 Australian-specification TA2 cars ordered or delivered for the start of the 2022 season, so the choice of where competitors want to race, how often and at what price point has never been greater.”

“We are excited to build TA2 racing as a truly national formula, we were eager to include an event in South Australia and what better venue to race at than the world-class circuit at The Bend Motorsport Park.

“We have experienced incredible interest already in the Western Australian regional series, so we are looking forward to launching that with a back-to-back festival in July with the King of the West challenge.”

“From what started as a club-level racing category for the gentleman driver, we are proud to have facilitated the enormous growth of TA2 Racing in Australia and we look forward to building on that in 2022.” 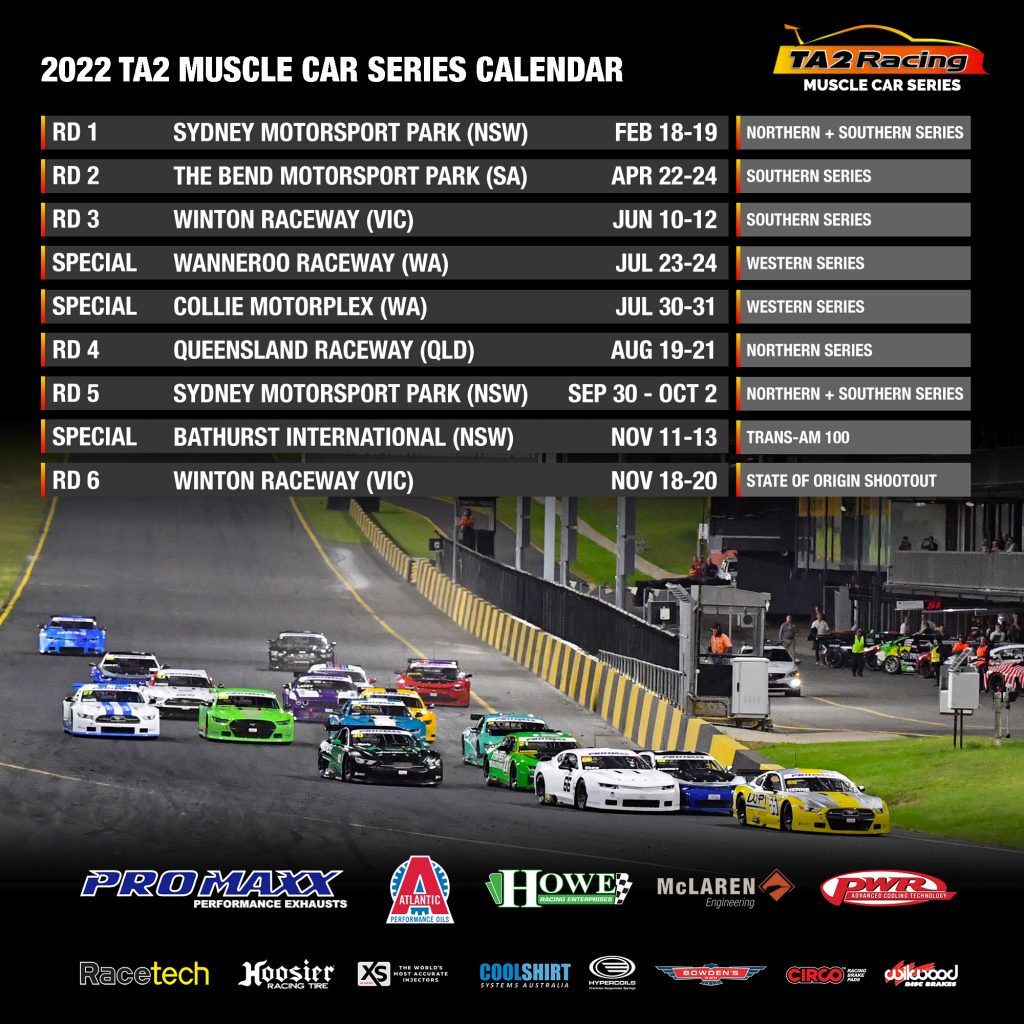